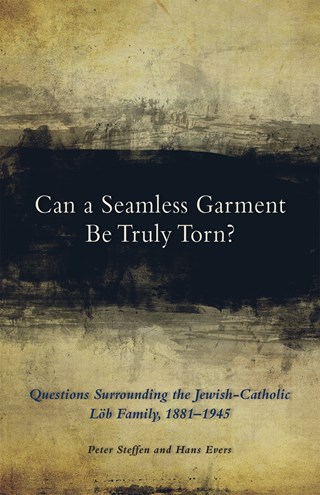 Can a Seamless Garment Be Truly Torn?

The conversion of Lutz Löb and Jenny van Gelder from Judaism to Roman Catholicism dramatically changed the lives of the extended Löb family. This scientific-historical study traces the personal and spiritual journey of Lutz and Jenny from their baptisms in 1907 through the lives of their children. The story benefits from historical documents and pieces of oral history from the only one of their eight children who survived the Nazi era, Paula van Broekhoven-Löb. The abbess of Koningsoord Abbey and the abbot of Koningshoeven Abbey generously provided access to the archives of the monasteries where the seven other Löb children lived as nuns and monks of the Löb family.

Each chapter begins with a citation from a significant situation or event, placing the reader immediately within the lived experience of that period. Photos of the time and the family supplement the historical narrative. The secret conversion of Lutz and Jenny and their lifelong witness to their faith created a tear in the fabric of the extended family while later leading to many idealized portrayals of them and their children. It is the intent of this book to offer an accurate and balanced account, situating the Catholic Löb family within their extended Jewish family, and to correct several decades of hagiography, so restoring humanity and dignity to the memories of the Löb family.

Peter Steffen has worked with child welfare and served as the director of the Alcohol and Drugs Clinic in Zwolle, The Netherlands. His studies include secondary education and theology. Steffen edited Monastic Information, the periodical published by the Benedictines and Trappists in Flanders and The Netherlands, and was one of the compilers of the book of photographs Bishop Bekkers, 1908-1966: An Ardent Priestly Life (Alphen aan de Maas, 2006).

Hans Evers is a pastoral theologian specializing in the history of pastoral care and is a pastoral caregiver in a general hospital in The Netherlands. His publications include Historical References Concerning Wittem as a Place of Pilgrimage (Heerlen, 1986) and The Night Gives a Chance: Exemplary Pastoral Projects in Limburg (Gooi and Sticht, Baarn, 1991).

[T]his volume can be recommended for its detailed portrayal of some facets of Dutch Catholic, and especially of Trappist/Trappistine, like during the interwar period.
James Flint, OSB, St. Procopius Abbey, Lisle, IL, American Benedictine Review