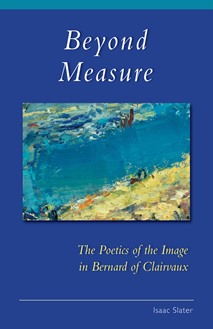 The Poetics of the Image in Bernard of Clairvaux
Isaac Slater, OCSO

Bernard continually returns to the classical idea that the quality of desire shapes theological imagination. By attending to the multiple ways he develops and applies this insight, Beyond Measure uncovers a new depth of organic unity to the literary, philosophical, and theological strands densely interwoven through his writings. Bernard's apparent iconoclasm with respect to art, affectivity, and the humanity of Jesus is revealed as an alternative mystical aesthetic, congruent with his program for monastic reform. The central movement of Cistercian spirituality from the carnal to the spiritual is shown not to elide but to recapitulate the carnal in higher spiritual expression. Further, this approach provides fresh understanding of the ways in which Bernard is at once "last of the fathers" and "first of the moderns." In particular, a careful reading of works by Julia Kristeva and Jean-Luc Marion on Bernard reveals both the enduring brightness and vitality of his writing and the relevance of his work for people today.

Isaac Slater, OCSO, a monk of the Abbey of the Genesee, received a licentiate in historical theology from The Catholic University of America. His articles have appeared in journals including Literature and Theology, Cîteaux, and Cistercian Studies Quarterly. He has published two collections of poems, Surpassing Pleasure (Porcupine's Quill, 2011) and Lean (Grey Borders, 2016), along with a co-translation of poems by Hafiz of Shiraz, The Tangled Braid (Fons Vitae, 2010).

"Slater's innovative work is unique in taking into account both the theological as well as the artistic dimensions of Bernard's writings. Attending to Bernard's insights into the role of the imagination and desire in spiritual transformation, Beyond Measure resonates with current concern about the true self and an accurate perception of the world and shows how the divine works through distortions and turns all things to good. It sheds new light on topics such as art, experience, and freedom in Bernard's corpus."
Raymond Studzinski, OSB, The Catholic University of America


"From the beginnings of our Order, Cistercian monks and nuns have expressed their desire for—and sometimes their insistence on—seeing God in the here and now sicuti est (`as he is,' 1 Jn 3:2), and none more than Bernard of Clairvaux. In this clear and illuminating study, Slater demonstrates to what extent Bernard considered this contemplative knowledge possible in this life, to what extent he accepted it as impossible, and how, by the transformation of desire, men and women could be brought closer to the impossible. Reading Slater's book, we are renewed in the willingness to allow the Word to work on who we are interiorly in the unrelinquishable hope of coming to know him for who he is."
Bernard Bonowitz, OCSO, author of Truly Seeking God